Bitcoin price reached a new all-time high at $35,776 on Binance on Jan. 6. Following the explosive overnight uptrend of Bitcoin (BTC), on-chain analysts are generally optimistic about the short-term trajectory. While many agree that the rally is beginning to show signs of overheating, it is not overbought just yet.

The major catalyst behind Bitcoin’s strong rally has been the continuous increase in buyer demand on Coinbase. Throughout the past week, Coinbase, the largest cryptocurrency exchange in the United States, saw premiums of around $100. This means that compared with Binance and other major exchanges, Bitcoin has been trading at a higher price on Coinbase. It could indicate a growing demand for Bitcoin from high-net-worth investors and, potentially, institutions.

Bitcoin strongly rallied overnight, recording a 10% gain within merely 10 hours. After the latest rally, on-chain analysts have said that BTC likely still has some room to rally further, considering that various on-chain indicators show the market could become more overheated if it follows previous bull cycles.

The short-term bull case for Bitcoin

Willy Woo, an on-chain analyst and the creator of Woobull, said the ongoing Bitcoin rally is “warm” but is not overheated just yet. Woo showcased the Bitcoin Network Value to Transactions Ratio, or NVT, price chart with premium, highlighting that the current rally has firepower for another leg up, based on previous peaks in 2013 and 2017. 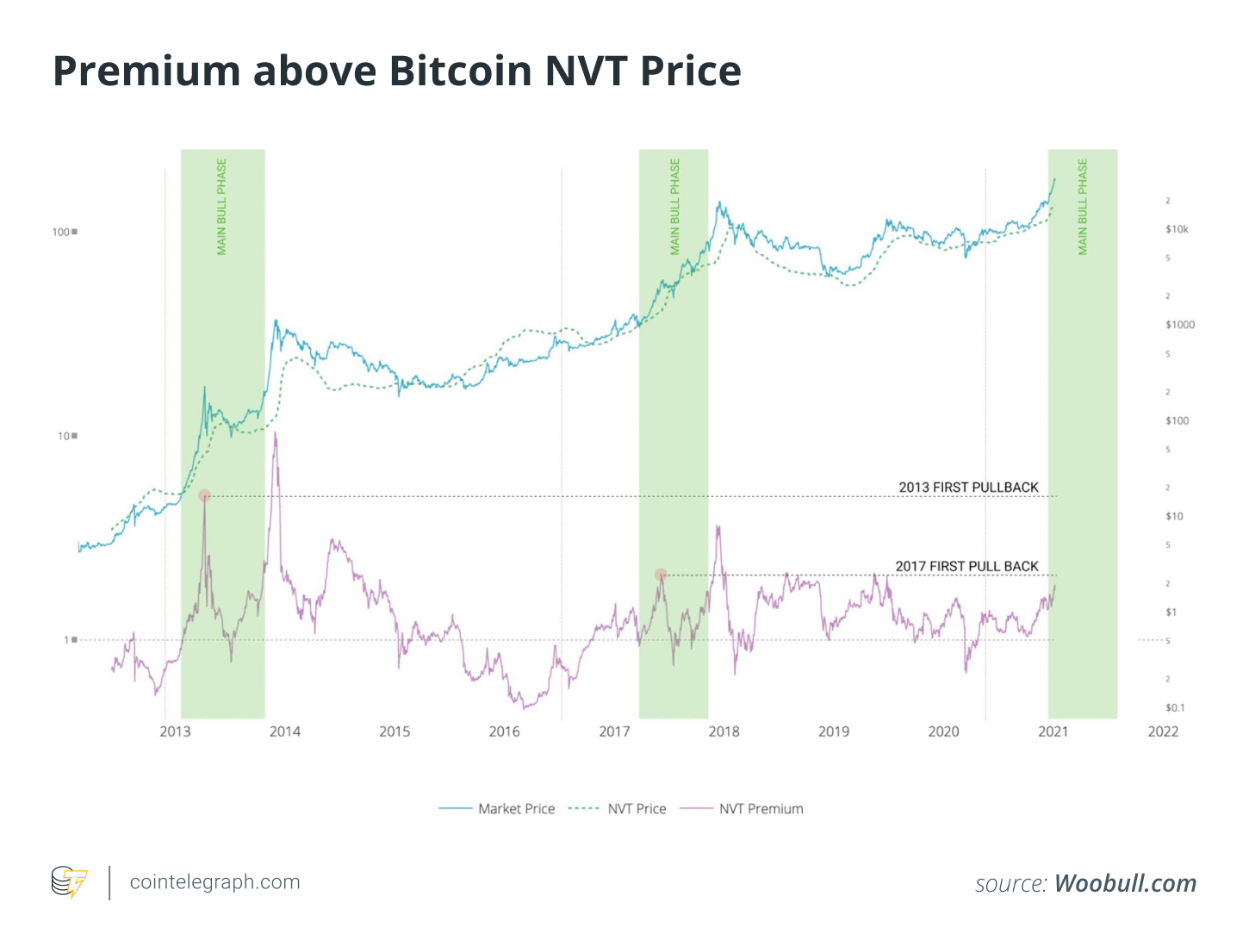 Bitcoin NVT is measured by dividing the market capitalization of Bitcoin by the daily volume of transactions processed on the blockchain in U.S. dollars. The indicator is typically used to determine whether Bitcoin is overvalued or undervalued at the given time. Woo said that the higher speculative premium in the spot market, which occurs due to real buyer demand, is another indicator that the rally is not overheated just yet:

“This is how much ‘speculative premium’ we have right now compared to similar phases of the prior 2 bull markets. […] Notice the higher than normal speculative premium in 2018–2019 when BitMEX led the rise of derivatives dominance, later tamed by spot dominance as Michael Saylor led the charge on spot buying.”

Analysts at Glassnode found that the MVRV Z-Score indicator is signaling the same levels seen in the 2017 Bitcoin bull market. The MVRV indicator is typically utilized to evaluate whether Bitcoin is overvalued or undervalued compared with its “fair value.” If the market cap of Bitcoin is significantly higher than its realized value, which is the valuation of BTC calculated based on where investors buy it, it has historically marked a peak of a rally. 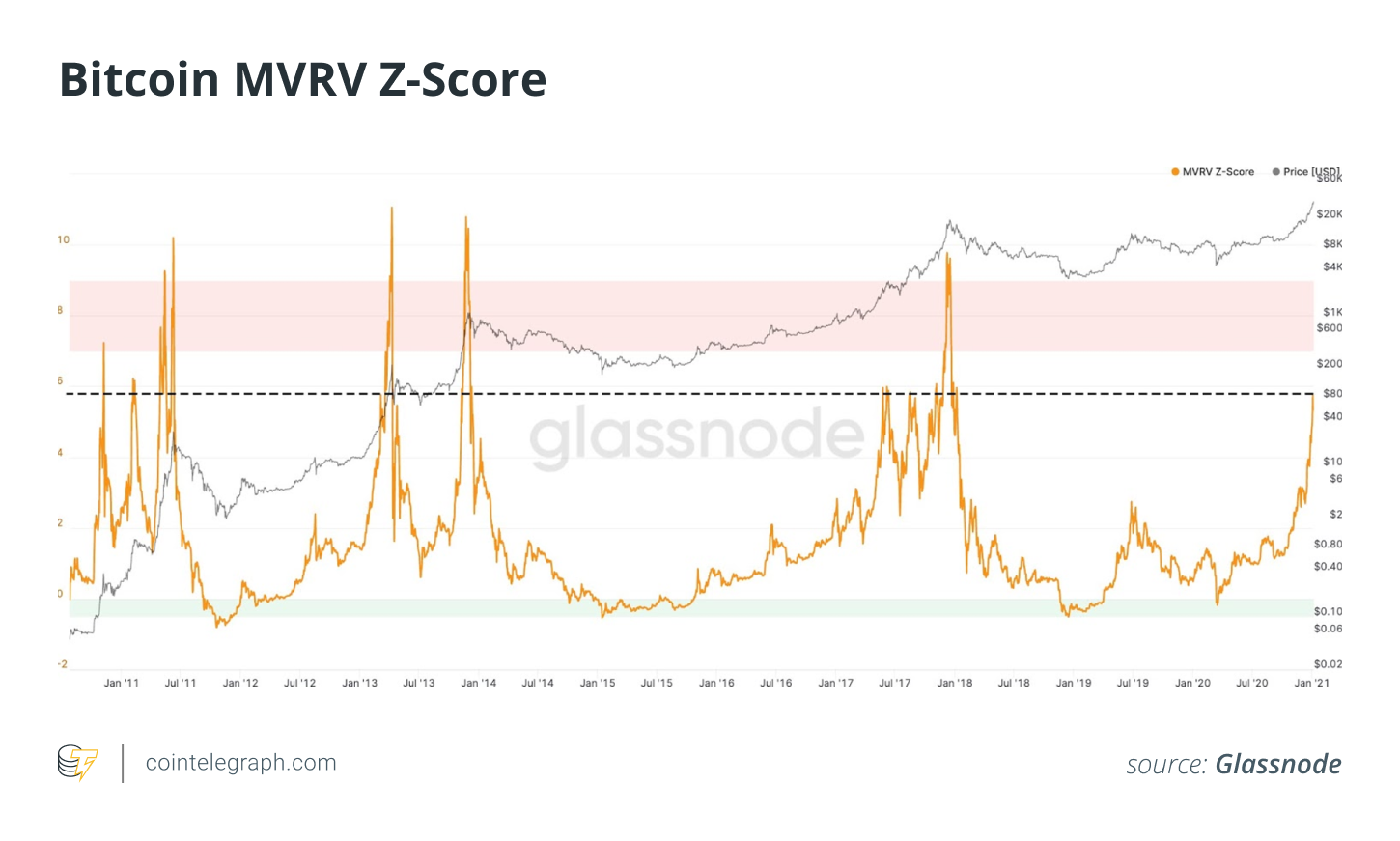 Alex Saunders, a cryptocurrency analyst, also noted that the volume of Bitcoin and Ether (ETH) on PayPal hit a fresh high at $110 million. Although Google Trends data suggests that retail demand is not at the levels of 2017, it remains high on PayPal:

“Retail demand is absolutely sky rocketing for $BTC & $ETH with PayPal on track to smash their highest single day volume of $110M. The general public is catching the magic internet money bug, just as a wave of institutional money has begun pouring in.”

This scenario ultimately comes down to two simple factors: cascading liquidations and slowing institutional accumulation. The Bitcoin futures market has reached a new all-time high in open interest, at over $11 billion. This means that there are more traders betting on the price of Bitcoin than ever before.

When futures market open interest is high, the probability of a long or short squeeze rises. A long squeeze is when long contracts or buyers are forced to market sell their positions if the price of Bitcoin drops sharply. They are under pressure because they borrow capital to trade BTC. Hence, when Bitcoin’s price drops to a certain threshold, their positions are liquidated, which turns into selling pressure.

The problem occurs when these liquidations happen one after another, causing a cascade. For example, $33,000 is a liquidation threshold for long contracts using 10-times leverage. If the price of Bitcoin drops to that level, it could liquidate another set of long contracts that entered at $34,000, and so on. If this trend continues, then the cascading liquidations could lead to a major correction. Bitcoin is not at risk of cascading liquidations for now, but with open interest at a record-high and the funding rate of the futures market at historic highs, the possibility of it happening is there.

Another factor that could cause Bitcoin’s price to correct in the short term is if the institutional accumulation of BTC slows down. Ki Young Ju, CEO of CryptoQuant, previously said that he believes Bitcoin will reach a local top once the buyer demand on Grayscale stagnates.

An important gauge of institutional sentiment around Bitcoin is the Grayscale Bitcoin Trust, which is often the first point of entry for most institutions in the United States. As such, if inflows into GBTC slow down, it would indicate a declining institutional appetite. 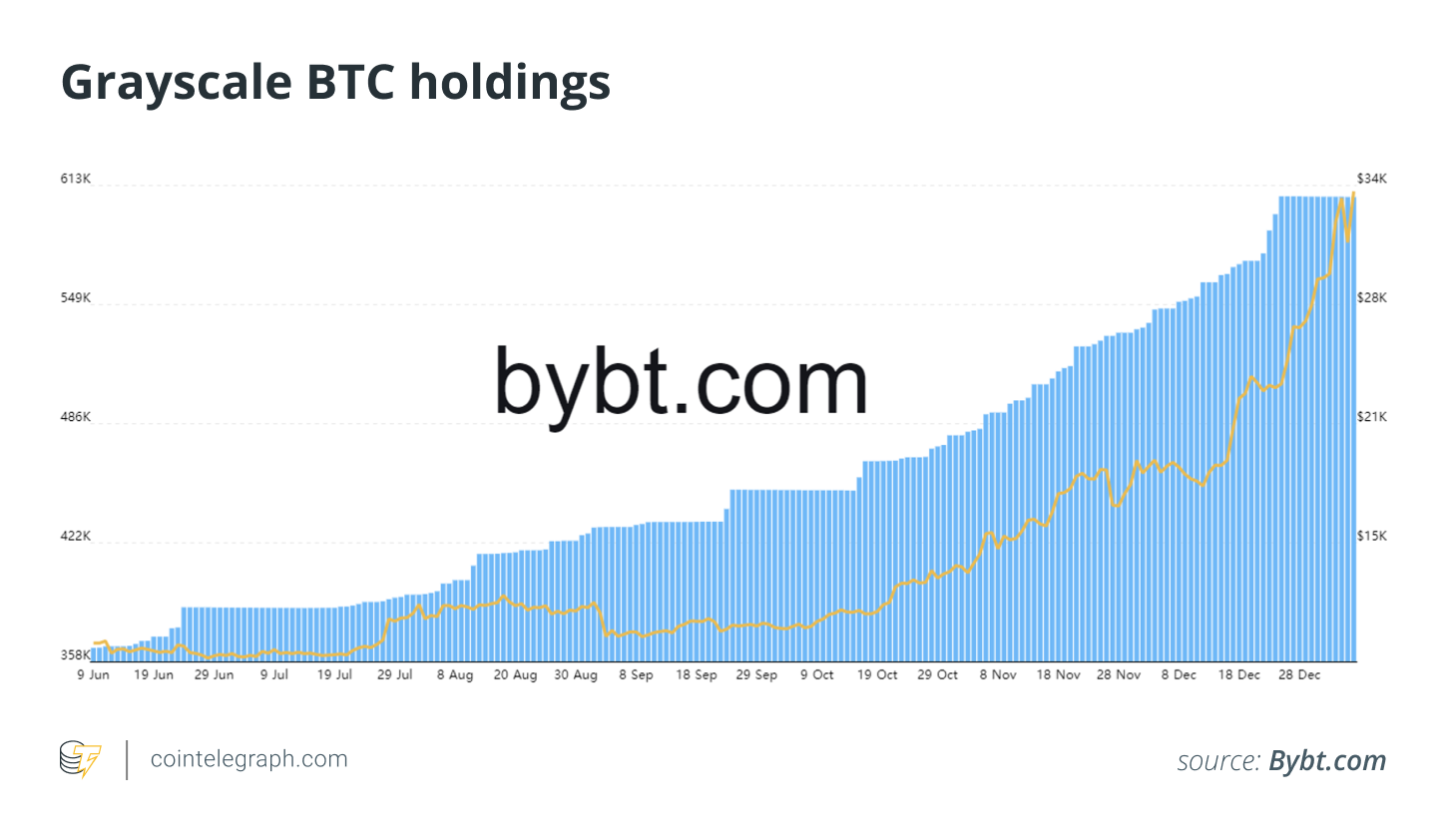 Due to the sheer momentum of Bitcoin, both criteria would have to be met in order for Bitcoin to see a sharp correction; institutional inflows into BTC would have to decrease, and cascading liquidations would have to occur in tandem. Whether this will happen anytime in the near term remains uncertain.

The biggest chance of this trend forming would be when Coinbase sees lower buyer demand, as its premium declines. So far, the premium on Coinbase is consistently hovering between $100 and $200, which is a positive sign.

Atop this, the hash rate of the Bitcoin blockchain network has risen to new record highs. At a point where the fundamentals of Bitcoin are strengthening and the technical momentum is not slowing down, the probability of a deep correction in the short term remains low. Still, cascading liquidations could happen at any given moment, as one big sell order or a sell-the-news event could trigger the liquidation of over-leveraged long contracts.

Bitcoin Price Analysis: BTC Correction Must Not Surprise Anyone