David Puell, an on-chain analyst and the creator of the Puell Multiple, believes two things could cause Bitcoin (BTC) to see a temporary top this cycle.

The analyst pinpointed the U.S. government potentially taxing unrealized gains and the possible approval of a Bitcoin exchange-traded fund (ETF) could cause BTC’s momentum to slow down.

Why would an ETF have a negative impact on the short-term Bitcoin price cycle?

The potential impact of the U.S. government imposing taxes on unrealized gains on the price of Bitcoin is quite clear.

At the end of each taxation cycle, Bitcoin could see a heightened level of selling pressure, pushing its momentum down.

But the prospect of a Bitcoin ETF potentially having a negative effect on the price of Bitcoin is a relatively new concept.

Puell explains that the arbitrage play of taking advantage of the premium of the Grayscale Bitcoin Trust has been a major catalyst for BTC’s recent rally.

The approval of an ETF could slow down the inflow of capital into the Grayscale Bitcoin Trust, which then could ostensibly lower the demand for Bitcoin on paper. Puell said:

“BTC: IMO, there are two plausible news items that would signal a cycle top for Bitcoin… 1. US taxes unrealized gains: selling pressure on an annualized schedule. 2. ETF approval, incentivizing GBTC to trade at discount, unraveling the main arb play driving this bull.”

These two events are unlikely to happen anytime in the near future. Puell emphasized that if they do happen, however, they would be fundamentally bearish for Bitcoin. He explained:

“Important note: Not saying they will happen tomorrow, but they are fundamentally bearish if they were to occur. Bitcoin would need to overcome these obstacles to continue its long-term path. I watch out for these.”

Traders are cautious about BTC too, unless BTC breaks out of $35,000

Nevertheless, Bitcoin has a good chance of breaking out of the $35,000 resistance level in the short term. It rose to as high as $34,880 on Jan. 25, demonstrating strong momentum in an overnight rally.

Loma, a pseudonymous cryptocurrency trader, said that the failure to surpass $35,000 could make altcoins more compelling, especially if the BTC momentum dwindles. He noted:

“Above $35k or when $BTC taps 26-27k, this avi changes and we get infinite bullish propaganda. Until then though, unless you’re scalping, things look pretty shit. Longing ALTs towards the end of the week with $BTC short as a hedge is still the play.”

As Cointelegraph reported, the weakness of Bitcoin in the past two weeks has led the ETH/BTC pair to break out. Large-cap altcoins, including Ether and DeFi tokens, have performed particularly well against BTC so far this year. 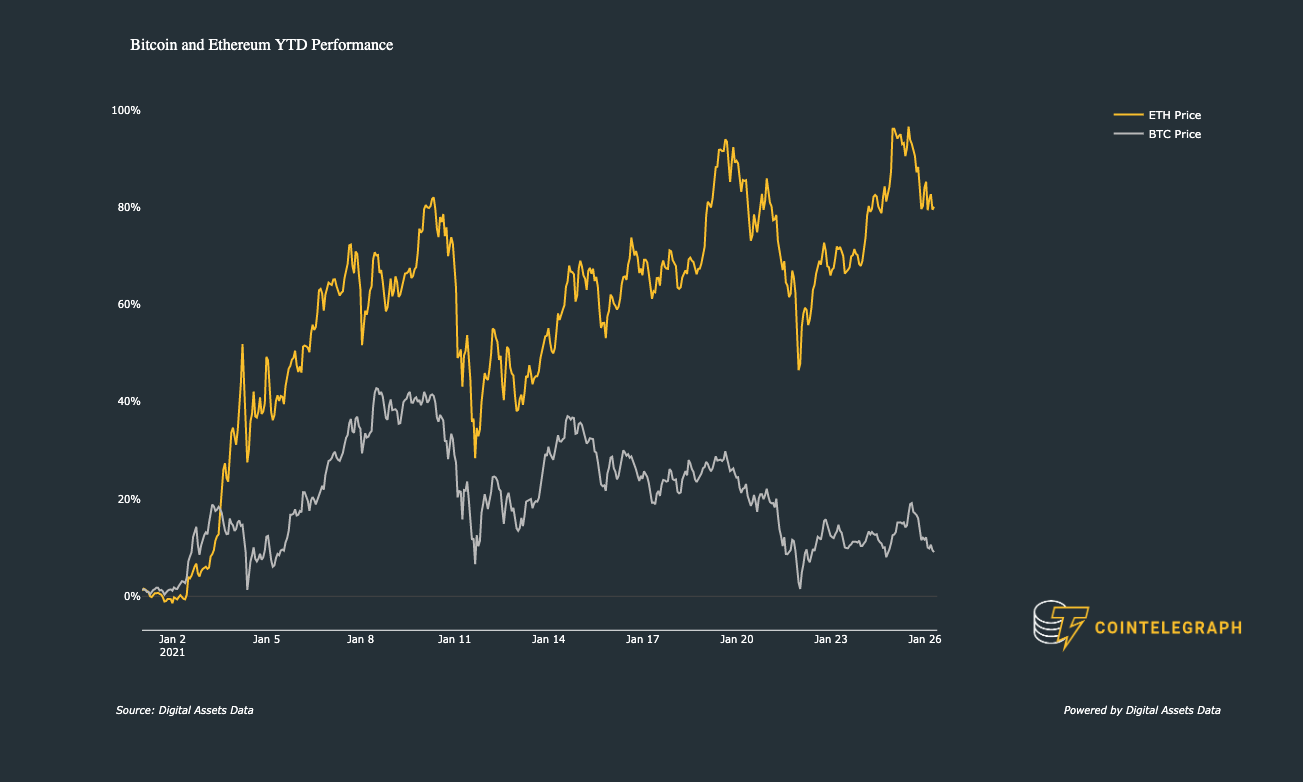 If Bitcoin continues to consolidate under $35,000 for now, altcoins will be in a good position to catch up in value against, particularly in their respective BTC pairs, in the first quarter of 2021.

Kazakhstan expects at least $1.5B in economic activity from crypto mining within 5 years