Bitcoin’s parabolic increase well above its previous all-time-high has many experiencing déjà vu from 2017 and a number of analysts are concerned the market is overdue for a sizable correction.

On Jan. 8 With Bitcoin (BTC) price reached a new all-time high at $41,940 and this week’s 28% collapse to $31,076 had professional and retail investors afraid that a strong trend reversal was in the making.

Bitcoin’s historical data shows that rapid parabolic ascents are usually followed by equally catastrophic corrections like the one seen after the 2017 bull run. Because of this, the current market’s similarities to the euphoric mania of 2017 to 2018 bull run have not gone unnoticed.

“Bitcoin’s risk is approaching 2017 levels. Investors that buy at this price can expect to lose 40% of their investment sometime in the future. However, the typical maximum drawdown is 30%, so this risk is only modestly elevated from the average.”

In a follow-up private conversation with Cointelegraph Peterson noted that there remains a short term bull case for Bitcoin stating:

“For bitcoin’s valuation to reach 2017 levels, it would have to be at least $80,000. There’s a small chance that would happen, and if it did, it would happen quickly. High prices have a tendency to move even higher.”

There are some telltale signs that Bitcoin’s quick gains reflect a manic market on the verge of a correciton and the current bull versus bear debate centers around whether this week’s volatility is a healthy pullback to test lower supports before the price initiates the next move higher.

LookIntoBitcoin founder and Decentrader analyst Philip Swift recently made the case that Bitcoin’s recenet price action reflected a “needed pullback/slowdown” and he noted that several indicators were flashing red, indicating that the rate of BTC’s price appreciation was reaching extremes.

“Price has now pulled back below the x3 multiple where I expect it to stay for a while. As others have spoken about, price likely ran up to x3 (beyond x2) because we’ve had an earlier mania phase in the cycle vs last cycle with both retail+institutions buying.” 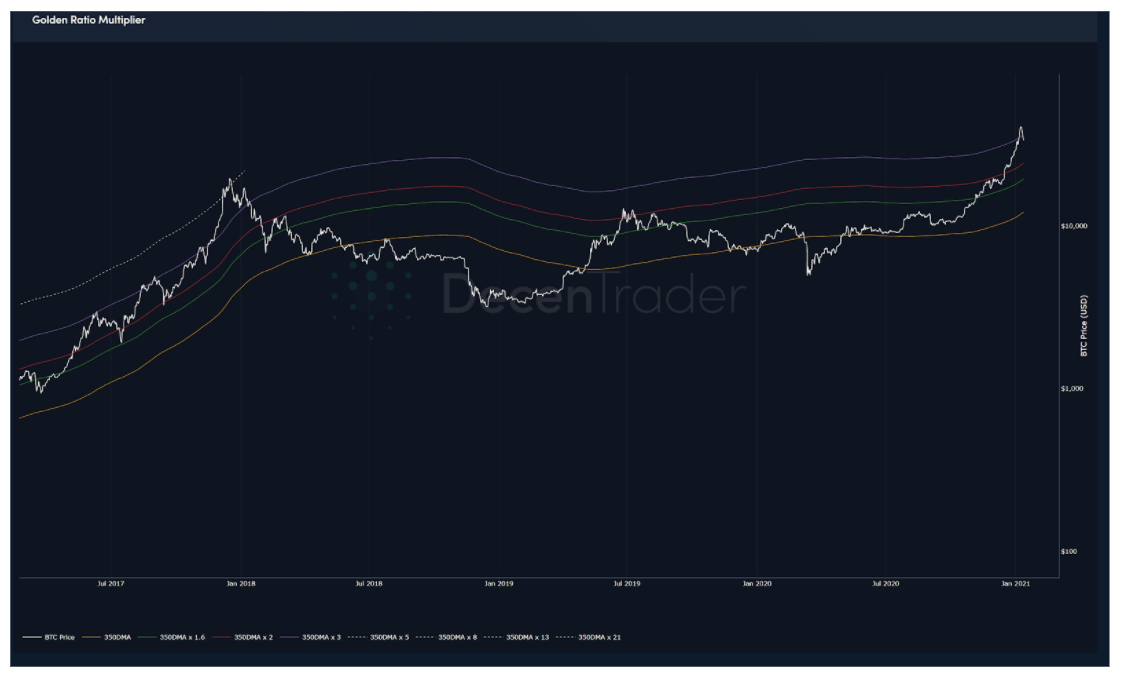 Swift’s analysis indicates that BTC is likely to trade sideways and slowly ascend in the near term but at a slower rate “as some money/profit rotates into altcoins.” Recent price moves in altcoins, especially DeFi-related tokens indicate that this rotation might already be underway.

While analysts and chart watchers are calling for Bitcoin to take a breather, bullish traders may have indicated that they have different plans. At multiple instances this week, bulls defended retest of lower support by buying into each dip and there is also the expectation that institutional inflow into BTC will resume now that Grayscale has re-opened its GBTC family of products.

A look at the 30-day average daily sentiment score for Bitcoin shows that despite the pullback, the average score has only decreased slightly from recent highs and is well above the lows seen during previous downcycles.

While few know the exact course Bitcoin’s price action will take this weekend, the strengthening fundamentals from a technical perspective, increased institutional inflow and positive announcements by government regulators suggest that the recent dips were nothing more than healthy corrections that were bound to occur before Bitcoin gears up to reach for a new all-time high.