The cryptocurrency and blockchain industry grew by leaps and bounds in 2020. The top two assets, Bitcoin (BTC) and Ether (ETH), gained 303% and 469%, respectively, which can be considered extraordinary in comparison with the 25% return of gold. While the precious metal is often considered a safe-haven asset, the two digital assets outperformed gold during the uncertain market scenarios that persisted due to the pandemic.

Joshua Frank, co-founder and CEO of The Tie — a firm providing crypto insights based on social media analytics — told Cointelegraph: “Across the largest 100 assets by market cap, the average cryptocurrency experienced an 87% increase in average tweet volume — with Bitcoin surging by 95%.”

Frank added that even though this current rally is driven by institutional interest, retail interest seems to be rising as well. All this will ultimately lead to a rise in interest in altcoins: “It is worth monitoring which mid-cap assets continue to see surging social activity as this is often a good leading indicator of price movement.”

With the attention around crypto spiking against the backdrop of prices growing at such a rapid pace, there are lots of companies, projects and cryptocurrencies that gained momentum in 2020.

Bitcoin: The most important crypto asset

Bitcoin was, unsurprisingly, the most mentioned crypto asset in 2020, with a 95% year-on-year increase in Twitter mentions. The price for 1 BTC rose from around the $7,000 mark to hit an astonishing all-time high of near $35,000 at the start of the year. 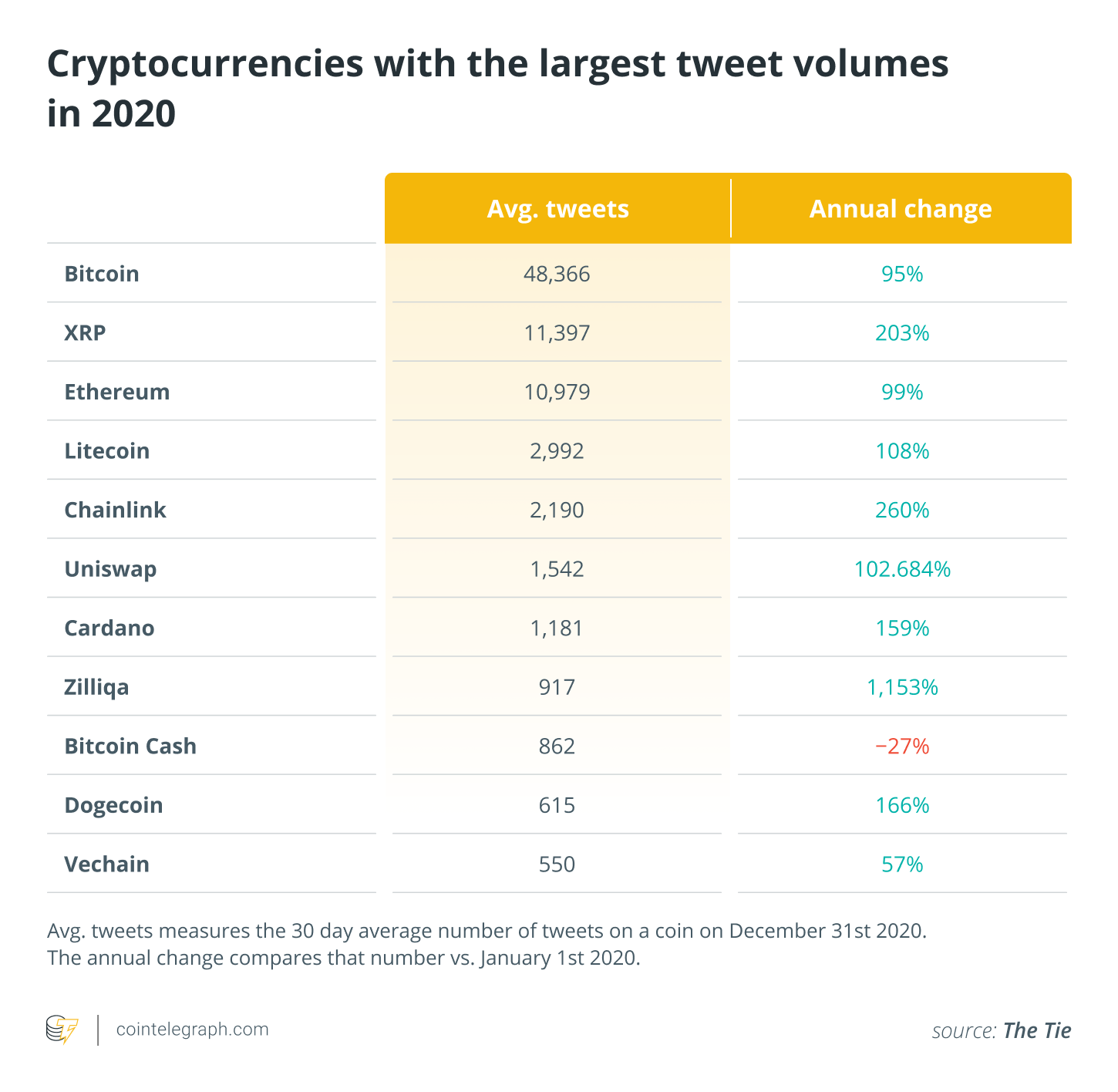 BTC received a lot of attention from the mainstream media in 2020. Grayscale, MicroStrategy, Square and MassMutual heavily invested in BTC, and even corporate giants such as PayPal and JPMorgan Chase began to invest to harnessing the opportunities that Bitcoin offers. John Todaro, director of research at TradeBlock — a provider of institutional trading tools for digital currencies — told Cointelegraph:

“For the first time, institutions are beginning to rush into the crypto ecosystem, with MicroStrategy, Square, MassMutual, and others leading the charge. All of these major institutions have so far only allocated to bitcoin — as bitcoin is likely the strongest digital currency when it comes to an inflation resistant digital gold.”

Michael Saylor, CEO of MicroStrategy, recently even took to Twitter to advise billionaire CEO Elon Musk to convert Tesla’s balance sheet from the U.S. dollar to BTC — all this among the third bull run Bitcoin saw in 2020. The bull run has continued into the new year and is expected to keep going for some time. Considering that this is the beginning of mainstream and institutional interest in Bitcoin, 2021 promises to be an even bigger year for the asset and blockchain technology as a whole.

Despite JPMorgan stating that Bitcoin is overbought, it will still continue to pull out capital from investors in gold; although, according to Goldman Sachs, both assets can coexist. Todaro added: “You will likely also see more companies follow MicroStrategy’s lead and put small allocations of their treasury reserve into the asset. This all bodes well for bitcoin to encroach on Gold’s market share.”

Ethereum: The blockchain with the most use cases

Ethereum is a blockchain network that runs smart contracts and supports the biggest altcoin, Ether. The main use case of the network is to enable the exchange of value with no intervention from third parties. The network was conceived by developer Vitalik Buterin in 2013 to expand the use case of Bitcoin’s technology, and it became officially active in 2015. In contrast to BTC, there is no hard cap on Ether, with the potential for an endless supply.

Ether showed promising improvements throughout the course of 2020. The spike in price that is being seen in early 2021 is happening around the same time as BTC continues hitting new all-time highs, indicating the positive impact of the enthusiasm of the crypto community. Apart from being a digital currency, Ether also acts as fuel for decentralized applications that operate on the Ethereum network.

The two landmark moments for Ethereum in 2020 were the rise of decentralized finance and the launch of the Beacon Chain for Ethereum 2.0. DeFi markets saw enormous growth in 2020, with the total value locked rising from $687 million at the start of the year to over $14 billion by the end — further skyrocketing to over $18 billion as of Jan. 4. This growth is generally attributed to the hype around liquidity mining and yield farming, along with the anticipation around Ethereum 2.0 and rise of DeFi oracles. 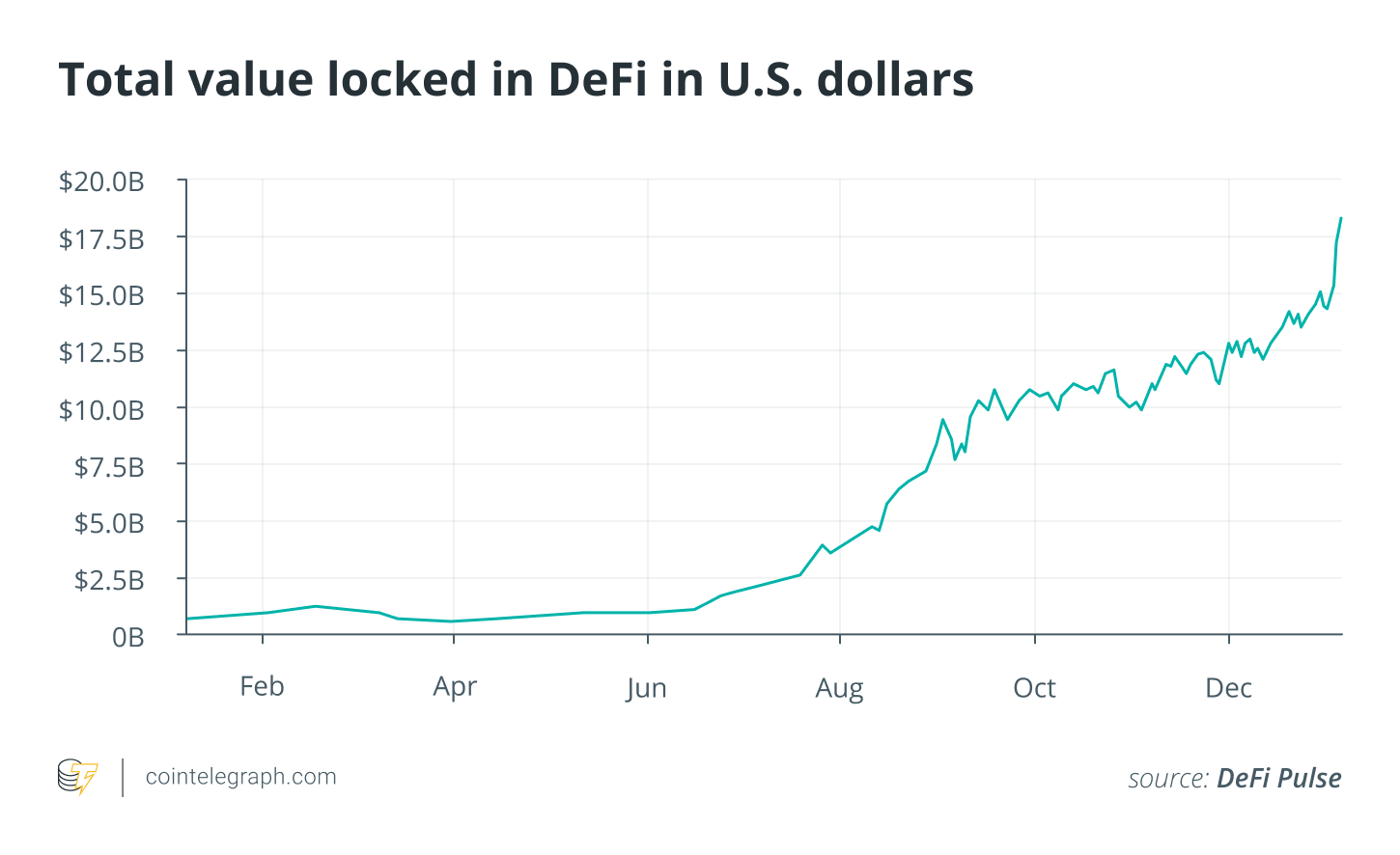 As seen with the continual rise in total value locked in DeFi projects in the second half of 2020, the TVL should continue to rise through 2021, and more use cases for DeFi should be generated through various DApps. Todaro further commented on the importance of Ether to DeFi markets:

“You cannot talk about DeFi without talking about Ethereum. With the majority of DeFi projects built on Ethereum, ether has become the lifeblood of the ecosystem when transactions are soaring (as evidenced by the surge in eth gas costs during the DeFi bull run over the summer).”

One of the top players in the DeFi domain in 2020 by total value locked was Uniswap, a decentralized exchange, or DEX. A DEX is a way to exchange cryptocurrencies without a centralized governing agency enabling the transaction. Uniswap’s token exchange uses liquidity pools guided by oracles instead of order books.

The exchange even airdropped its own token, UNI, to its users as a controversial response to SushiSwap’s vampire mining attack. Uniswap’s token saw the highest increase in tweet volume, reaching approximately 1,500 tweets per day. 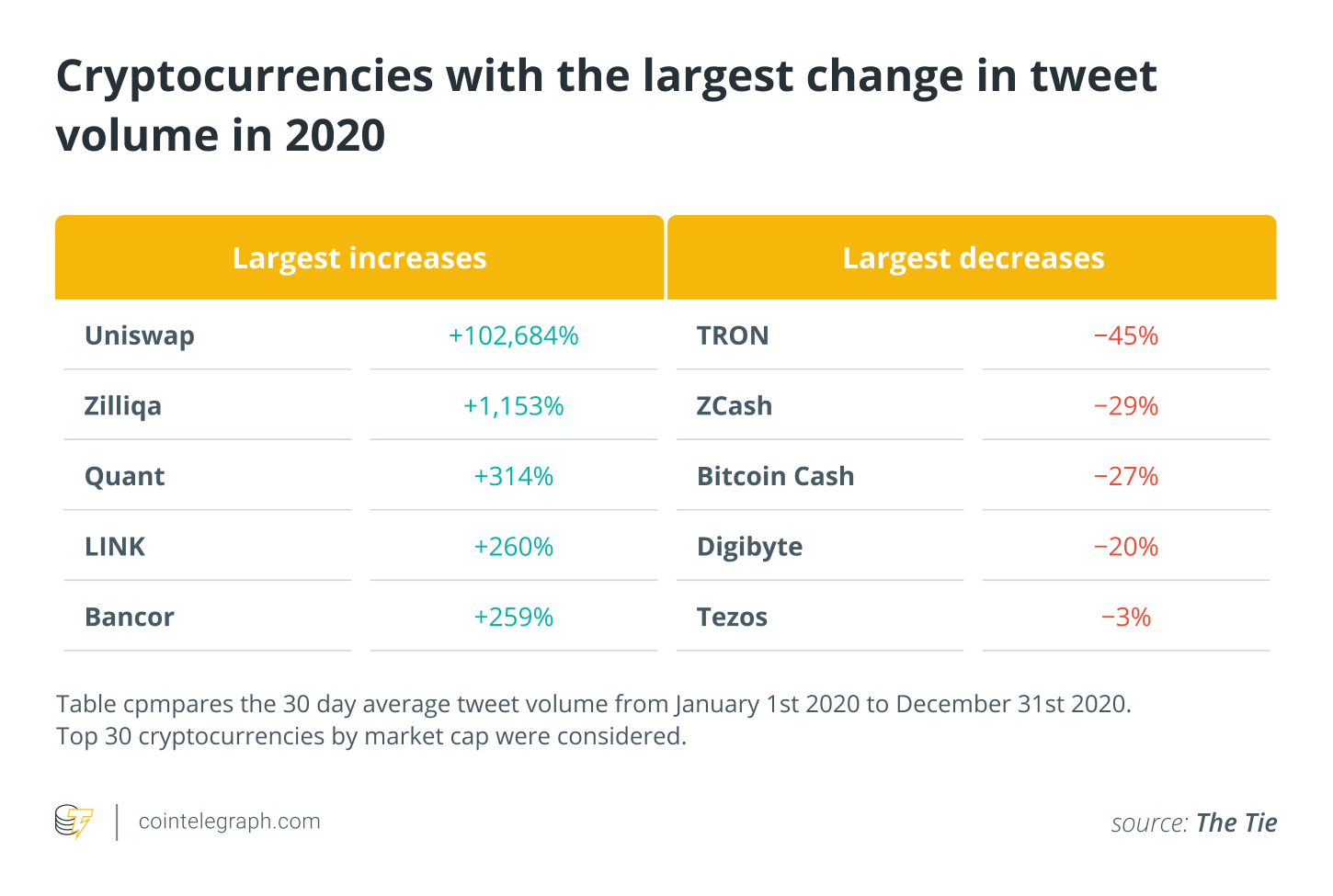 The rivalry between Uniswap and SushiSwap seems to have benefited both communities, as the total value locked in both protocols combined is just over $4 billion of the $18.63 billion locked as a whole, according to DeFi Pulse. With regulations likely to tighten for centralized exchanges, DEX’s are bound to see a further increase in new users as market participants look to maintain their ability to trade on noncustodial exchanges.

The community has its own token, LINK, which is the cryptocurrency used by the network to pay for various operations involving data. LINK saw a 260% year-on-year increase in Twitter mentions in 2020, according to Frank.

Chainlink announced partnerships with enormous entities like Google and the Chinese state-backed Blockchain-based Service Network. It was also tapped by Ethereum’s blockchain rival Tezos to provide real-time data for its community projects. Due to the unique proposition that oracles provide for smart contracts to interact with real-time data, the oracles domain should expand further in 2021, seeing Chainlink and its competitors like Band Protocol and Compound fighting for market dominance.

Circle: The company behind the fastest-growing stablecoin

Circle is the company that runs the second-largest dollar-pegged stablecoin by market capitalization, USD Coin (USDC) — which was the fastest-growing stablecoin of 2020. Its market capitalization grew multifold from around $500 million at the start of the year to $4 billion by the start of 2021. Circle even collaborated with the United States government on a “global foreign policy objective” in Venezuela where USDC was used to distribute relief funds to medical workers and Venezuelan locals.

In light of recent attention from U.S. federal regulators, stablecoins might just be the crypto community’s first real point of conflict with regulators. They could soon be regulated by what’s now dubbed the “STABLE Act,” which intends to “protect consumers from the risks posed by emerging digital payment instruments, such as Facebook’s Libra [Diem] and other Stablecoins.”

The President’s Working Group on Financial Markets even released a statement regarding the key regulatory and supervisory issues relevant to “certain stablecoins.” Todaro commented on what the implications of this increased regulatory attention could mean for stablecoins: “Stablecoins will likely see increased regulation in 2021. It is difficult to see how this shakes out, but USDC will likely become more centralized than it currently is and will likely become closer related to a bank than a decentralized consortium.”

The trend continues into 2021

Although 2020 was a phenomenal year for crypto, 2021 holds an even larger potential for the growth of the industry. The Chicago Mercantile Exchange will launch its Ether futures in February, which is bound to push the markets further.

Frank further opined that the Twitter metrics indicate an even larger interest toward cryptocurrencies in 2021: “The surge in Twitter conversations has continued into and been even more pronounced in the first week of 2021.” He went on to add: “Today Ethereum’s Tweet volume hit an all-time high (doubling the previous record set in 2018) and two days ago both Bitcoin and the overall crypto market saw Tweet volume all-time highs, besting marks set in 2017.”

Title: The crypto and blockchain projects with the biggest buzz in 2020
Sourced From: cointelegraph.com/news/the-crypto-and-blockchain-projects-with-the-biggest-buzz-in-2020
Published Date: Tue, 05 Jan 2021 18:39:15 +0000

Will this time be different? Bitcoin eyes drop to $35K as BTC price paints ‘death cross’