As a result of the ongoing uptrend, many prominent institutions from the realm of traditional finance have sought to join the crypto bandwagon so as to not miss out on the ongoing action. For starters, a jump in open interest and trading volume for Bitcoin futures has been witnessed across the board over the course of the last couple of months. While that may have been expected, what may come as a surprise is that the Chicago Mercantile Exchange, a global derivatives exchange, recently became the world’s largest Bitcoin futures trading platform.

In this regard, data released by crypto analytics platform Bybt indicates that CME accounts for $2.4 billion of the $13 billion overall open interest in Bitcoin futures, closely followed by crypto exchange OKEx’s total of $2.17 billion and ahead of other prominent players such as Binance, Huobi and Bybit.

It should come as no secret that Bitcoin’s (BTC) meteoric ascent since December 2020 has increasingly been grabbing the eyeballs of investors all over the world. To put things into perspective, despite BTC’s recent dip that saw it drop to just under the $32,000 mark, the currency is once again trading well above the $38,000 threshold — thereby showcasing a net 30-day profit of around 95%.

Is institutional interest increasing, or is stagnation setting in?

The recent volatility has sparked concerns over the sustainability of the current bull season and has raised questions regarding if institutional interest in Bitcoin is starting to reach a plateau. Konstantin Anissimov, executive director of United Kingdom-based cryptocurrency exchange CEX.IO, told Cointelegraph that it is important for new entrants to realize that the game is not simply about institutions making their way into the market but rather that they see a drop in the risks:

“Unless something truly drastic were to happen that could turn this entire market on its head — and I can hardly imagine anything so bad — I believe more large companies will continue to invest into Bitcoin and other cryptocurrencies in the future.”

Quinten Francois, host of the YouTube channel Young and Investing, believes that most institutions that wanted a piece of the action have likely already made their way in, adding that during parabolic phases like these, it’s hard to imagine more big-name moneyed players making their entry into this space, at least until the end of the year when things become more stable.

That being said, he did add that most institutions that have boarded the crypto gravy train are now likely to accumulate during dips, and when they do stop, retail money will slowly pour back into the market, pumping the value of BTC even further: “They are smart money and know what they are doing, they are not going to buy into parabolic moves.”

There’s no denying that Bitcoin is a much more mature asset than during the bearish phase of 2018, especially with regulations having progressed significantly in certain jurisdictions. Furthermore, the crypto market now has a substantial number of professional trading houses and non-crypto businesses participating in it.

These factors can help greatly with dampening Bitcoin’s volatility and increasing its liquidity as an investment asset, according to Anissimov: “Institutional investors are not so much the key to driving Bitcoin’s bull run as they are a path through which this market as a whole can be tempered, becoming more stable and efficient.”

That being said, if established institutions come into the crypto industry, they will have an effect on the price movement of most cryptocurrencies. In the end, this may help the industry as a whole, especially when considering that most traditional finance players will aim for long-term deals that can potentially help protect Bitcoin from crashing in a manner similar to what was seen in 2018.

Recent moves are worth noting

Earlier this month, CoinShares, a European firm that deals with crypto-finance and exchange-traded products, announced that it had successfully facilitated the trade of more than $202 million in XBT (Bitcoin) certificates on the market’s first day of 2021. It is worth noting that the Bitcoin exchange-traded-note provider is approved by Sweden’s Financial Supervisory Authority and that the company’s aforementioned offerings are currently available for purchase via Nasdaq. 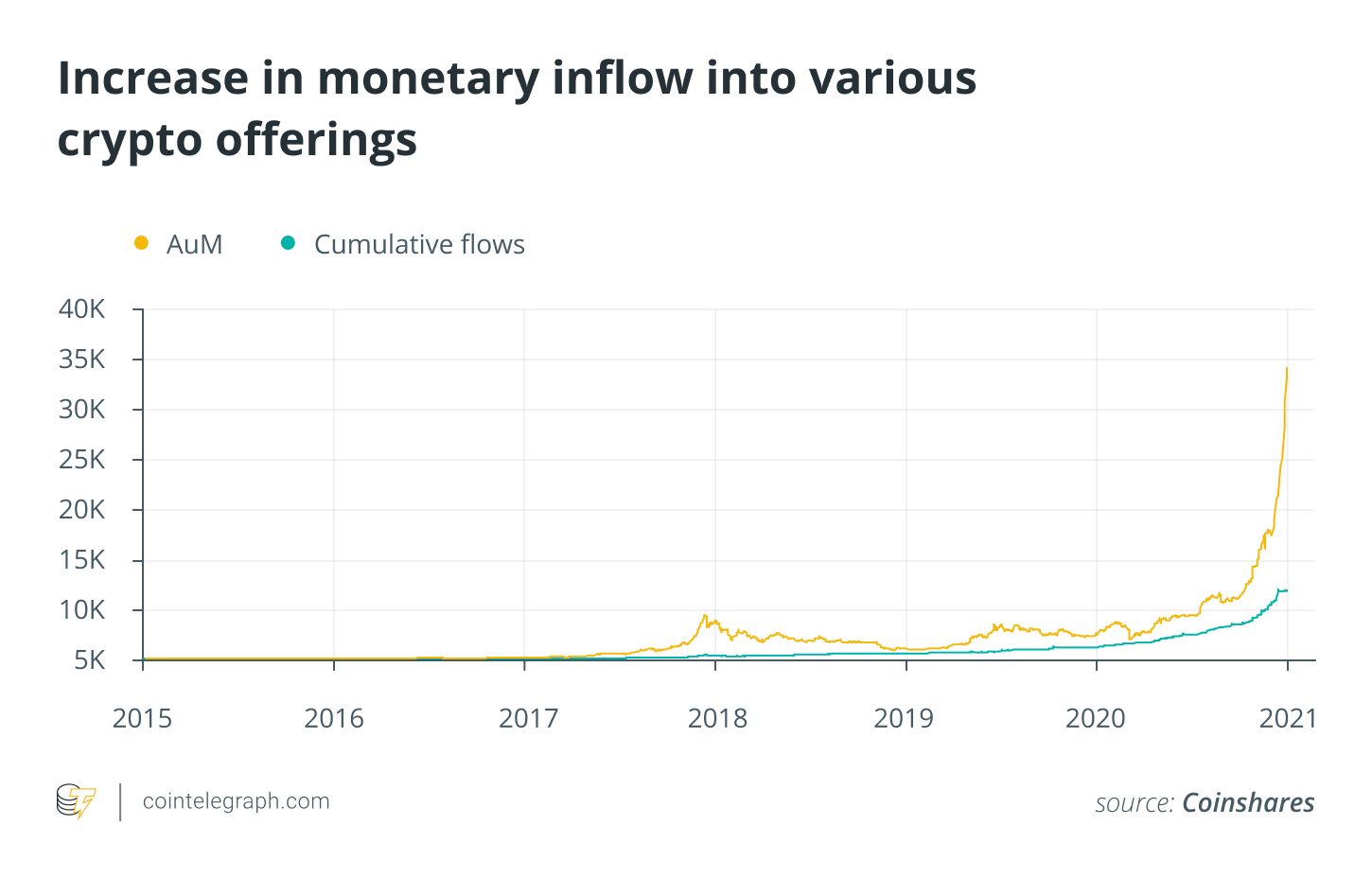 Also, according to CoinShares’ “Digital Asset Fund Flows Weekly” report from Jan. 11, $34.5 billion worth of capital is held in crypto investment products as of Jan. 8. Of this total, $27.5 billion, or 80%, is in Bitcoin funds, while $4.7 billion, or roughly 13%, is invested in Ether (ETH) products.

Comparing the performance of Bitcoin funds during this ongoing bull run with that of the one witnessed in 2017, the report states: “We have seen much greater investor participation this time round with net new assets at US$8.2bn compared to only US$534m in December 2017.”

Also, last year, the United States Office of the Comptroller of the Currency said in a landmark decision that national banks can custody crypto assets. This announcement was followed by another major development wherein the OCC also stated that American banks can even provide services to stablecoin issuers, such as holding reserves.

While some traditional institutions were already indulging in this practice prior to the above-stated decision, there was an air of uncertainty around this space due to a lack of legal clarity. Now that an official clarification has been given, stablecoins that are backed one-to-one by fiat currencies that are held in a bank’s reserves are not deemed a risk in the United States.