In a first for professional soccer, Spanish team DUX Internacional de Madrid has used crypto to buy a new player. Ex-Real Madrid player David Barral is a new acquisition for the club facilitated by the cryptocurrency trading company Criptan.

Although technically this is not the first recorded Bitcoin (BTC) transfer, amateur Turkish club Harunustaspor bought 22-year-old player Omer Faruk Kiroglu back in 2018 for 0.0524 Bitcoin and 2,500 Turkish Lira. This move was performed to gain attention for the club in international media for doing “something new” but not necessarily sparking blockchain adoption in soccer.

DUX’s acquisition is indicative of the adoption of blockchain technology and crypto tokens within the soccer community and its fans. This development came soon after European soccer giant AC Milan joined the blockchain bandwagon by announcing on Jan. 18 the impending launch of their native fan token, ACM, on the Chiliz blockchain, a fan engagement platform.

The CHZ blockchain includes 20 other sporting organizations and has reportedly been installed 450,000 times, with token sales exceeding 14 million in number, with the fan token of reigning Italian Serie A champions Juventus ($JUV) being one of the first to be listed on the platform. Alejandro Laplana, CEO and Founder of Shokworks — a company that develops digital platforms for various brands and sports teams — discussed AC Milan’s move with Cointelegraph:

“This is great because it can engage their 250 million (+) fans all across the globe and include them in exercises like voting and direct feedback in club policy. Moreover, this can further engage them with gamified loyalty and rewards programs via secure smart contracts that reward engagement with additional tokens. It can also help build liquidity by listing their tokens in exchanges.”

AC Milan’s entry into the blockchain domain is an interesting case when compared to other soccer clubs that have joined previously, as it is a club with a huge fanbase. The club’s achievements have been scarce over the last decade, and this move is bound to streamline fan engagement and enable it to acquire new fans, especially given its current push to win the Serie A league title.

In addition to AC Milan, other soccer clubs, such as Juventus, Paris Saint-Germain, Arsenal and Manchester City are becoming participants in the blockchain and crypto community. In fact, Spanish giant FC Barcelona generated $1.3 million in less than two hours after launching its token, BAR, selling 600,000 Barcelona crypto-based tokens for $2.20 each back in February 2020. The initial sale was oversubscribed by more than five times, and the price of the BAR rose by 200% in the first five minutes of trading on Chiliz. It currently holds a market capitalization of over $20 million.

Laplana further stated how FC Barcelona’s token is unique when compared to the token offerings from other soccer clubs: “It helped inform — via fan interaction — the design of the mural for the first team locker room. […] The token is designed to reward holders of the tokens (fans) for increased engagement with more tokens.”

The coronavirus global pandemic brought sporting events to a standstill, canceling most of them and postponing the 2020 UEFA Football Championship and the Tokyo Olympics 2020 being postponed to 2021 for the first time in history. The soccer industry was hit with empty stadiums due to COVID-19 restrictions and with the general lack of engagement and monetization from the global fan base. Since fans are not in the stadiums, tokens provide them with voting rights in club-specific polls or give them access to VIP experiences or can be redeemed against exclusive club merchandise.

Another way to engage fans is through trading cards and fantasy soccer games based on a blockchain. For example, Sorare is a blockchain-based fantasy soccer game that leverages classic soccer trading cards and fantasy league games. It runs on the Ethereum blockchain and uses nonfungible tokens. An NFT is a special crypto token that represents something unique, and thus, it is not mutually interchangeable. FC Barcelona star center-back Gerard Pique is a seed investor for Sorare.

Use cases go beyond fan engagement

Amid the ongoing global pandemic, fan engagement is the most important aspect that the introduction of blockchain within soccer can bring about. However, there are several other use cases that can become vital.

Laplana explained that soccer clubs can use the technology to build up liquidity for specific programs such as stadium renovations, adding: “Another use case is clear and transparent elections in a sport that has unfortunately been tarnished by decades of rampant corruption and disputed election results at every level of the sport.” 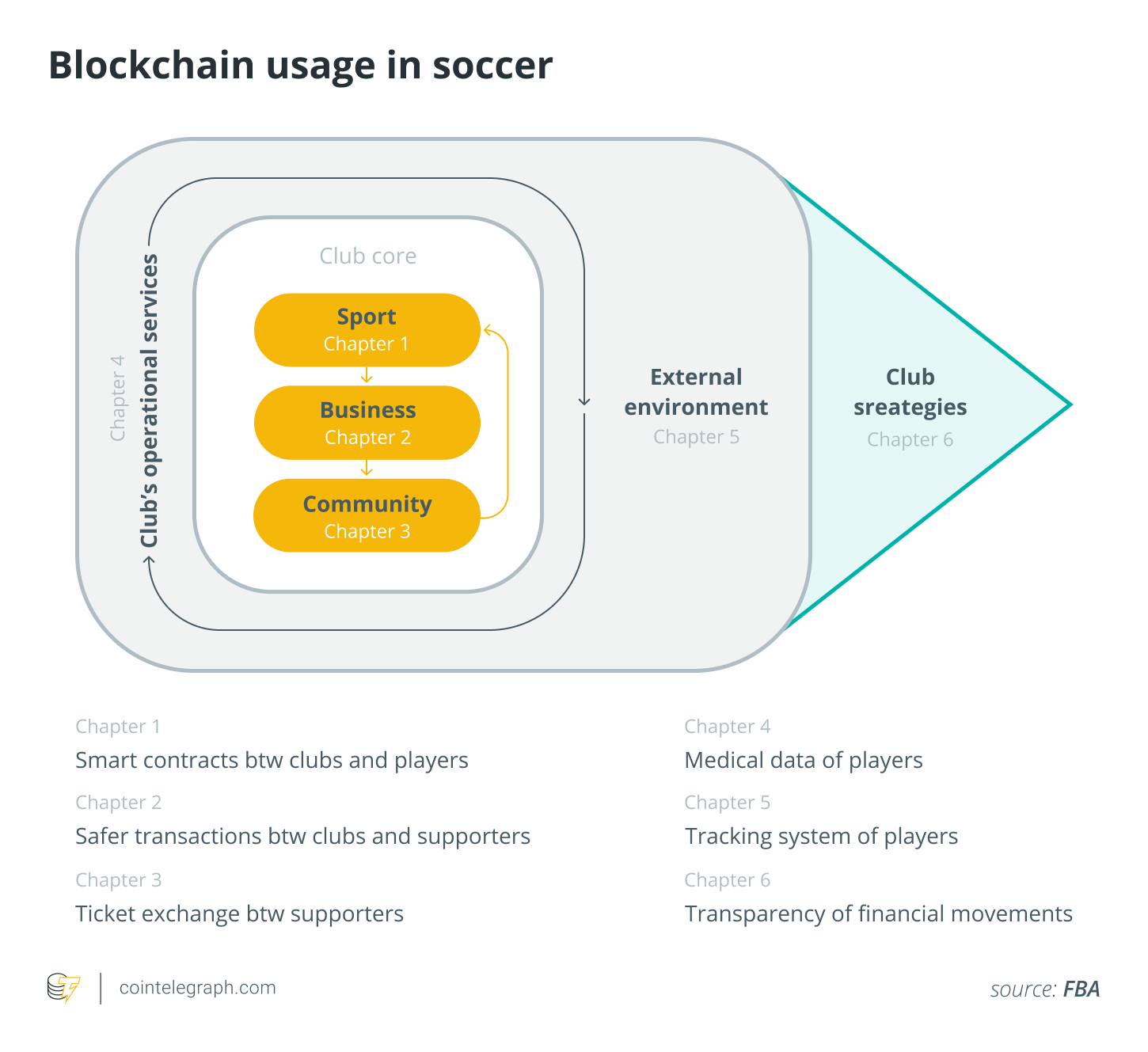 The ongoing global pandemic has been devastating for sporting organizations, including soccer, as stadiums are currently going empty, affecting the revenue and fanbases of teams. Various major international clubs are now resorting to crypto and blockchain to find ways to bridge this gap.

These use cases could be employed for clubs that have a considerable fanbase and are currently facing challenges on and off the field. Stefan Ateljevic, founder of BitcoinPlay — a Bitcoin gamification platform — told Cointelegraph how cryptocurrencies could begin to play a larger role in the economics of the soccer world:

“In the next few years, I wouldn’t be surprised if clubs used crypto as legal tender between themselves — if it legally becomes an option. Clubs that have cryptocurrency reserves could simply use these assets to buy and trade players, as they would in any other fiat currency. This could extend to even salaries, as crypto becomes more integrated into the business world.”

With the advent of smart contracts, clubs could also use blockchains to code a player’s transfer record, thus enabling soccer organizations to trace a player’s history from the youth academies all the way to global sporting leagues. The same can be done with the player’s medical data history to enable club management to make informed decisions with ease about their picks from the talent pool. This can be done by using tools like PowerAgent, which is a smart contract ecosystem that enables sporting professionals to create and manage smart contracts by connecting all the involved parties of the athlete’s contract negotiation and agreement procedure.

Fans could also benefit from having an easier ticketing exchange mechanism, as the technology makes exchanges safer and more reliable, eliminating tickets being sold on the black market. Another impending use case could be the monetization of proprietary content on Over-The-Top media platforms and current popular general content providers — such as Netflix, Disney Hotstar, YouTube, Amazon, etc. — via smart contracts becoming critical to the growth of teams, clubs, leagues and players.

Blockchain technology and crypto can be utilized in various sports across the globe, offering opportunities to engage fans, stakeholders and players alike. Roham Gharegozlou, CEO of Dapper Labs — a blockchain-based gaming company — told Cointelegraph that blockchain technology has been used with other sports in the United States:

“Sports leagues, teams and athletes are starting to understand the importance of cryptocurrency and blockchain technology. Fans of the Sacrament Kings and Dallas Mavericks can purchase tickets and merchandise, using Bitcoin. […] $12 million+ has been invested by collectors on NBA Top Shot, and we’re still only in our Beta. Recent Top Shots have gone for as much as $35,000, and this trend shows no signs of slowing down.”

Even though Dapper Labs is involved with the National Basketball Association of the United States, popular sports in the U.S. such as basketball, football and baseball have a smaller presence in the crypto sports community compared to soccer.

Ateljevic further opined that the regulatory situation in the U.S. makes it more difficult for clubs to adopt the technology: “Crypto regulations are different in each country or zone, such as is the case in the EU. In other words, I think it would be a bit more complicated for the NBA or NFL to start using crypto in their customer engagement strategy.” Laplana stated ways in which this regulatory environment can change:

“It is up to club boards and their partners to take charge in building and rolling out fan tokens — in close contact with domestic regulatory authorities — that can add value to fan bases and the organization under a compliant framework.”Title: Hat-trick hero: Empty stadiums get blockchain and soccer to play together
Sourced From: cointelegraph.com/news/hat-trick-hero-empty-stadiums-get-blockchain-and-soccer-to-play-together
Published Date: Sun, 24 Jan 2021 15:07:00 +0000

US dollar smashes yet another 20-year high as Bitcoin price sags 2.7%

What is the worst nightmare that could happen to crypto? Experts answer